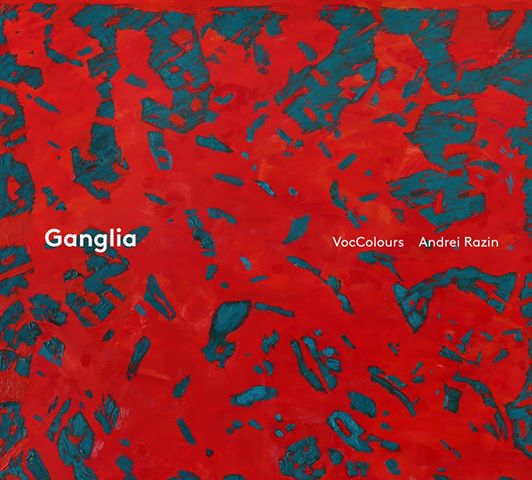 When it comes to talk about the development of a musical sector we try to examine what was done by composers and musicians before the creative intervention. In terms of vocality history is certainly not stingy with consequentiality, but the interest in modern vocalism is still rather defunct, especially that of improvisation. Ganglia, the new cd of VocColours together with pianist Andrei Razin, is a prime example of how to work at full capacity on humoral condensations of vocality: epidermically organized labor to develop from parts of free jazz.

Ganglia is an emotional whirlwind that shakes four voices and a piano, to articulate a land of wonders immediately perceptibile to listening. Artistically, attention is paid to fragmentation, a series of extended techniques that can be produced by the voice and the ability of forming “unique” harmonics that do not have a rule, be explained either in heaven or on earth. The peculiarity of VocColours is that musically they have managed to create a bridge between the vocal experimentation of Jaap Blonk, those of classical music post 1950, those of vocal falsifications of McFerrin and the harmonic attitude of the great vocal groups with a hook in jazz (Trio Lambert-Hendricks-Ross and then Manhattan Transfer).

Ganglia is great right from the cover, a reproduction of Niepokoj (Anxiety), the painting of the young Polish artist Marta Kawecka, a painter particularly interested in the representation of “boundaries” between different arts: the fitting restlessness expressed by the painting is combined with the sort of the human nervous system catalyst fungus. It is intended to indicate a station f the revolution, the place in which is formed a core of elements capable of being able to support new settings. Why not be able to replicate in music, what happens in science or the visual arts?

Norbert Zajac, Brigitte Kupper, Gala Hummel and Iouri Grankin seek to effectively respond to this question, knowing you are holding the right weapons to provoke reverberations of true emotion. And regarding the latter, Ganglia presents ample reporting:  Blue, Grankin embodies a kind of Polyfemo awakening, which crosses with four piano chords thrown into nothingness and a talking that remembers of Al Jaurreau by We got by; from the tremolo we go to the reciting style alla Van Schouwburg in Poltergeist, a piece in which a surface jazz meets a special counterpoint, with individual and incomprehensible languages coming and going, vocal simulations (from bass to McFerrin to operatic voices), which, however, are recomposed in a notion of poltergeists that must be grasped in a meaning of an uncommon trajectory as well as Brownian motion goes to seize the random pattern, where the improvisation do not have direction, but a hint at a spectacular experimental incest (arrests, fragmented intonation, agitations, etc.). A forced laugh opens A BING, incoherent development of a club song, worked on toneless notes, who adapt more or less quickly to the apprehensions of the piano part, while On t’entend opens with an incredible vocal performance of Kupper, takes the form of a plethora of vocal castrations, in a dialogue with Razin and further connections the Schwitters sonatas; a free piano introduces and supports A faint chill, a surreal song that lives of helical melodies, where the four get together but increasing chaos in the second half, followed even in dynamic Requiem7, with the vocal carried to extremes. Ganglia is rather vocal and musical atoms moving free, made of fast scat, simulations and non sense that intertwined in a breathless vaulting; the final Golden fog seems then a piece 4AD, brought in the area of vocal improvisation, these are the harmonic ghosts that stand in the acoustic space.

Do you understand that Ganglia would be finished right in my best 2018 if I had heard it in time!